I first became interested in photography when I bought a camera to take with me to motorbike race meetings. This camera was the Halina 35. With it’s fixed lens. Manual exposure and little knob on the top to wind the film on it was not really the tool for action shots although looking at some of my old TT shots they don’t look too bad. How I wish I had the negatives now!

I built a shed at the bottom of our garden for my motorbike and partitioned off a section at the end for a darkroom. I had a gnome fixed lens 35mm enlarger and the usual trays to do black & white processing and enlargements although I don’t think I ever made an enlargement bigger than 5x7 in there.

Years later I used to black out a bedroom in our present house to use as a darkroom and did B&W prints up to 16x20, some with the enlarger head turned round and the baseboard on the floor. Handling 16x20 flimsy trays of chemicals was a bit dodgy too.

The enlarger I first used here was a small Ilford 35C I think it was called, it was a colour head with sliders to put the filtration in. I bought a set of 16x20 Nova deep tanks to start colour printing and later bought a LPL 770 colour enlarger for colour and mono multigrade printing, Filling the deep tanks up with chemicals proved too expensive in the end so I scrapped it all (although I still have the LPL enlarger – hoping it will all come around again!!)

The next step was digital printing. I had a complete kit of Bronica ETRSi 645 equipment stuck in the cupboard doing nothing (I had tried the weddings thing with it) so I traded it all in for the original A4 Epson Stylus Photo inkjet printer and wow, I was in business – welcome to the digital age. I have always used AppleMac computers (are there any other?) and have had Epson 1279, 1290 and now a 2400 printer.

Camera wise, I started with the Halina, then moved onto Pentax with first an ME Super and later a Pentax Super A.
Whilst completing a Photography National Diploma course, a friend asked me if I could try and sell a Nikon F801AF body he had bought but never used, at the time I had started my health problems and was having eye trouble. With this in mind I decided I may need an auto focus camera myself before too long and bought the F801 for myself. I then had to buy lenses for it but I was on the Nikon trail and not looked back since!

Needing a second body I bought a second hand Nikon FE body, this was later replaced with a new Nikon F80 kit. Next I went digital with a Nikon 995, a very versatile camera but only 3.2MP. A Fuji S1, Nikon D200, Nikon D300 followed this and now I have a Nikon D300s. I have recently bought a used Nikon D80 as a second body and also have a Nikon D70s converted to Infra Red. I have a small Fuji compact camera, which also fits into a waterproof housing for underwater photography. Only snorkelling though. I would love to go Scuba diving with a camera but fear I am not fit enough. A couple of years ago I had a knee replacement done and find doing the breast stroke difficult now so just like floating along with my head in the water seeing what’s below  - but not in Southport!

I am a hoarder and amongst my collection of 'junk', I still have the TT race programmes from 1961, 63,64,65,66 and 1967, great for identifying my old TT pix. I also have a selection of old British Motorcycle sales brochures and have made a few images from below; 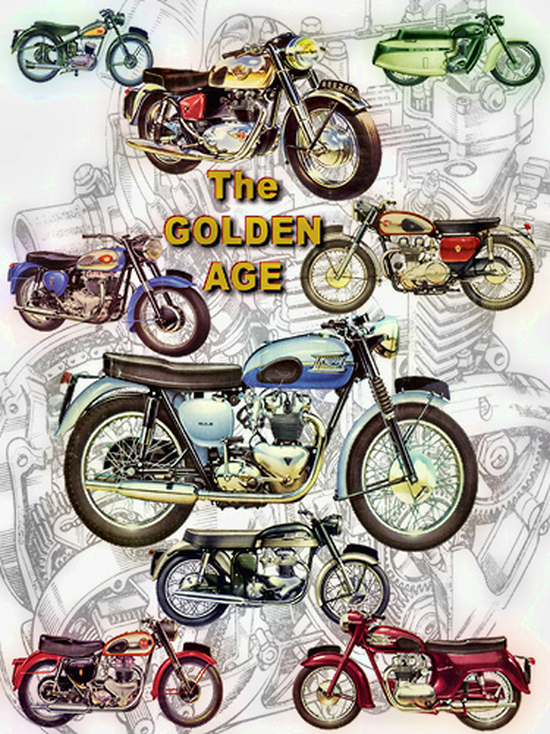 Left is a poster I made up to A3 of some of the great British Motor Cycles of years gone by.

The 125cc BSA Bantam was the first bike I ever rode, an older friend was the first one to have a bike and he used to let us all have a ride on it. I nearly put it in a ditch on one of my first rides. He later had a BSA Gold Flash, in blue like the one on the poster.

The Triumph 650 Bonneville was the bike of our dreams. Our local Triumph agent had one in the two tone blue like the one on the poster, up on a high stand in the shop window and we used to ride down to have a look at it  - and drool!

I once borrowed a work mates 350 BSA Gold Star to go to the TT on and it broke down. I had to tell him to meet me in Liverpool with a van! I then had to fix it.

At the time I had a 350 Velocette ME but the smartest bike I owned was the Royal Enfield 250 Crusader Sports which I had for quite a while. I later traded it in for my first four wheeled passion wagon, an Austin A35 Estate car (a van with windows in really)(and I did have an old Austin 10 for a while too) In 1966 I bought the only new motor I've ever had, my second passion wagon an Austin Minivan.I sold that just before getting married and bought an older Mini Saloon and then a Wolseley 1100 which rotted away.
Next I had an old Vauxhall Viva, bought off Ginger McCain. Later cars were a Hillman Avenger, Ford Capri GT Mk2, MGB, Triumph Dolomite Sprint, Ford XR3, Vauxhall Cavalier and Ford Fiesta. I ran my own Painting & Decorating business before I had to give it up due to ill health and started it off with a Viva van followed by three Ford Escort Estate cars (one was written of in a smash-not my fault!). The estate was very handy as I could get a ten foot plank crossways from the windscreen to the back door in it.

After leaving bikes for a number of years, I started work at a factory were a few of my workmates had bikes and a chap in the factory was selling a Yamaha 125 twin, so I bought it. Here comes the born again biker! This Yamaha was physically a very small bike but being a twin was great fun to ride. Next came a Suzuki 250 Hustler and then the last bike I owned, a Honda 400 4cylinder the 400x4, what a smashing little bike that was. I told my wife that a 400x4 was for sale at the factory and I would love it, She told me that if I stopped smoking she would give me the money to get it,
I have not touched a fag since!